Covid-19 Update: We are still here for you and continue to process orders as per ususal. Shipping is also carried out normally. 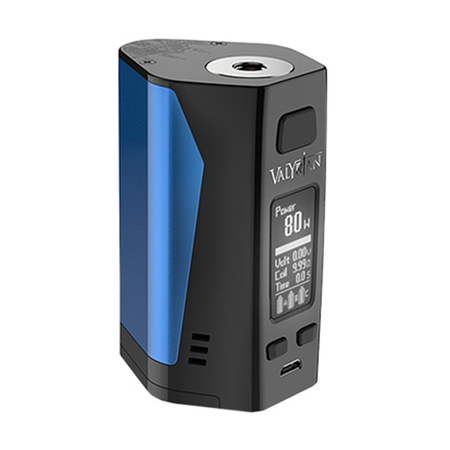 An e-cigarette produces vape by electronically heating the liquid. A solid, reliable current source in the form of a box mod is indispensable. The so-called mods are available in numerous different versions, functional possibilities and performance spectra. Often referred to as the heart of an e-cigarette, a good and high-quality rechargeable mod is an important prerequisite for a sensible and perfectly functioning starter kit, in which it acts as a base. On VAPSTORE® you will find only original products of all well-known manufacturers in each available variation.

In the meantime, it is no longer a rarity that a powerful box mod generates far more than 200 watts of power and is not only fired with one but two 18650 batteries. In addition to rechargeable batteries, partly also built-in batteries are offered.

Box mod with display, or rather with a touchscreen?

Many mods are different in operation. Some are operated with pushbuttons, others offer a display, on which all relevant data such as atomizing temperature, or vape mode are displayed. In the smartphone and tablet era, mods with a touchscreen are of course very popular as they are simple to use and known from other electrical devices, even a simple  kitchen scale now offers this function.

Subohm vaping is often under discussion, whether it is just cool, or a bit stupid and nonsensical. In subohm mode it's about producing a lot of vapor, and some say it offers a stronger taste, some vapers also claim to require a lower nicotine concentration. A box mod working with less than about 1.2ohm, is indispensable for this vaping style, everything below this value is what vapers call "subohm". In the present time, the range is very wide, numerous box mods can be run with a significantly lower resistance, up to 0.1ohm without any risk.

Little girls do not want to drag heavily, which is why just more compact models with only one 18650 battery, or a light, fixed battery is very popular for them. In addition, the handling for small hands plays a further decisive role, also therefore the choice often falls then ultimately on a smaller, more handy mod. Finding the right colour is not an issue, the spectrum is almost limitless and brightens woman and man equally with wild or completely discreet, simple versions.

Power to the people! Some Mods and Box Mods offer the possibility to vape with an inserted charging cable over an external power source, which means that even with an empty battery you don't have to wait until it's charged again. The charging of current mods and box mods can always be done via integrated micro USBport plugged into your notebook or computer.

Last but not least, it's your choice, which mod you want to use, while some are exclusively designed for pure performance, other models show an increased travel comfort and offer different advantages. Take a look at our range of box mods on VAPSTORE®, the premium e-cigarette onlineshop.